There are no regulars at the Pigs Gut. No familiar faces, at least not friendly ones.

None of the clientele is here to drink and none are here to enjoy the atmosphere. The owners never make a profit from selling liquor, although the prices are fair. Like the belly of a whale some enter and are never seen again, most do not even try.

The Pigs Gut Tavern has only one reason for existence, one undeniable and very dark purpose - the illicit business of the covert meeting. Meetings for a myriad of diverse reason, incubators of devious plots, but always most secret and only for the eyes and ears of the intended participants. Unfortunately that was exactly what Strat wanted to do. He was an accomplished spy with an air about him, attuned to the eavesdropping of closed conversations but never in a place like this. No normal benches and tavern tables, the whole rancid place was full of closed booths, made from thick oak impregnated with hundreds of years of silent secrets. Here he was, sitting in one of the said booths two away from the conversation he was being paid to know about and not able to hear a single word. The chain mail curtain blocked his view of the common room but it felt as if a score of hidden eyes were boring into him. This whole thing was starting to look bad. In mounting desperation Strat looked towards the heavens pleading for inspiration. The idea hit him like a ton of rat droppings. The damn roof was missing from his booth, which was probably why it was unoccupied in the first place. If he could just climb along the top of the booths, surly he could hear the proceedings from above.

A cautious head rose from the booth, the common room was black as night only a dank smoke hung in the air illuminated from the odd improperly drawn mail curtain. He eased himself onto the divider between his booth and the next, muscles quivering with silent effort. Inch by inch the distance between him and the target booth grew less. The rough wood of the booth vivid in his perception, who knows what shady deals were being struck in the spaces below him, he didn't let his mind dwell on them only the booth in front of him was of importance. Every breath, every creak of the wood seemed amplified beyond measure, if he was caught now, it would be a river water breakfast.

After what seamed like an eternity Strat reach his goal, now he would have results. Hushed words began to filter up to his keen ears. Then the bottom fell out of Strats' world or more accurately the top of the booth, a thousand times a thousand families of wood worm had done their work well. The table rose up to met him in a cloud of dust and splinters, men stood in a single gasp, like lightning steel grew from grubby hands. Then silence fell, a voice coughed in an atmosphere gone thick. Strats' mind raced, to fight was useless. "Err...rat catcher. There be a big-un in this here tavern. You seen 'im?"

Somewhere out at the edge of the horizon, lightning flickered staccato, sending fingers of bright into the sky, but too far for the rumble to be heard. For a moment the outline of the Spur stood against the brooding slate sky, impossible in its complexity. Massive, stalwart, brooding in its solidity, but above the bulk of its rock-bound foundation grew platform upon platform, roof upon roof, spire upon spire all crisscrossed with walkways and bridges, untidy and jumbled in an unplanned evolution of needs. In the un-illuminated cloud shrouded night again now, just a vague outline of darker dark against the gloom of the Dal, just a few windows twinkling with oil light lamps give it some semblance of reality. The Spur. This crazy black stone edifice whose pinnacles seem to sway and waver in the night mist, madness of long forgotten architects made real.
Spurside 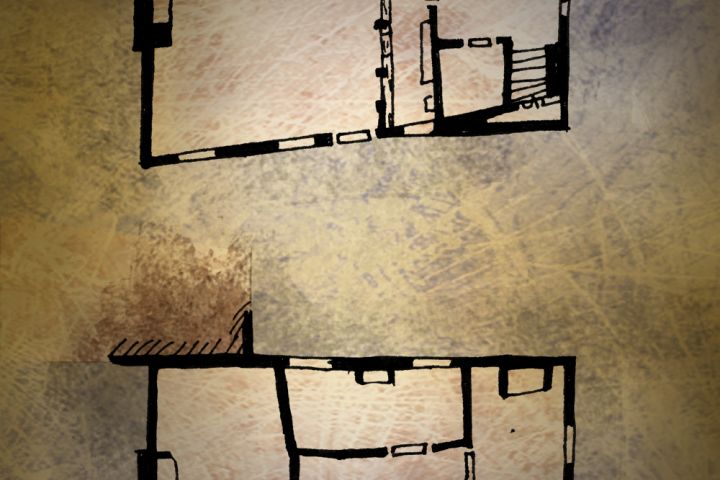 Need to ease those aching muscles? But don't relax too much!
The Healing Balm