Foyle stood at the arched window, high up in the walls of the Buttress, his hands on the cold, ancient age worn stonework. He did not feel that cold, his mind caught a moment in a far off stare. In the distance, across the swirling waters of the mighty Dal, sunlight glanced, silver, threadlike, off the Canal that was the cause of so much pain in Solis. His gaze lingered there a while, was then pulled along that thread to the smudge on the horizon that was, up close at least, the white stone beauty of Dal Haven. Shimmering Dal Haven, the antithesis of Stinking Solis.

Pulling his focus back to the city of stink, he stood surveying the vista laid out below him. A cold sea wind carried the cries of gulls across the rooftops that cascaded below from the flanks of the Buttress to the slums that crammed up against the storm battered Sea Wall that ran along the western edge, to the markets and squares of the canal quarter watched over by the SeaWard towers, down to the crooked and ship-choked wharves at Dockside that fringed the tide pool. He gazed beyond that black slicked basin where more rooves erupted in a cacophony of chaos from the dark basaltic rock of the Spur. Twisted and turned out there, all convoluted and intertwining, linked by walkways and bridges, rotted and ruined, age old and cast aside, save by the flotsam of humanity that knew nowhere else.

To his left, the great edifice of the Scar Bridge joined the mass of upriver Solis to the Spur and formed the eastern boundary of the City. That great stone scaffold stood a hundred or more feet above the race, festooned with an aeon old growth of dwellings, as mad as those on the Spur itself, but much more precarious it seemed.

The Scar. A wound, a laceration cut clean into the rock itself, a great cleft that ran deep between the land and the Spur. It formed a deep channel that torrented Dal water into the TidePool when the moon was right. Equipped with great valves to keep the flotillas that crowded the wharves safe from the race, it was in disrepair these many years, and when the rains were heavy, the Springs were high and the moon was funnelling the waters fast . then, the tidepool was a place of chaos and fury that no-one wanted to experience. Those days, the wharves would be empty or at least almost so, as the Dal itself became home to a thousand bare masts and a host of straining anchors.

The stench that wound its fetid tendrils round the alleys and cuts of dockside and canal, that seeped into the seaward slums and the crowded hovels that flanked the Buttress seldom climbed this high. Up here, and higher too in the rarefied air of the high town, the privileged lived out their lives without feeling the taint of the poor and the dispossessed. Up here, the rich could feel the cooling sea breeze, bask in the warmth of the sun long into the evening, long after the rest of the city was coughing and sputtering in the smoky haze of a hundred thousand dirty night lights. And when finally dusk did descend gossamer thin, they could light the dark places with lamps fed from deep within the city itself. clean and bright, better even than the whale lamps of yesteryear. The same gaseous fuel was piped up even higher,

Hightown, the crisp clean home of the few who looked down upon Solis with uncaring disdain, was inextricably linked to the squalor below and more over was saviour to so many. For deep within the bowels of the earth, deep inside the churning body of this age worn place, the fires of the Earth still stir. From deep within this old volcanic remnant the gasses of old mother earth fume and billow. They feed the Hightown fires and the great light that burns in the top most pinnacle, the guide to sailors and fisherfolk, the call home to traders and privateers, the beacon in the night.

Solis. A patchwork of rich and poor, life and death, above and below. And Foyle did not know even a fraction of its secrets. 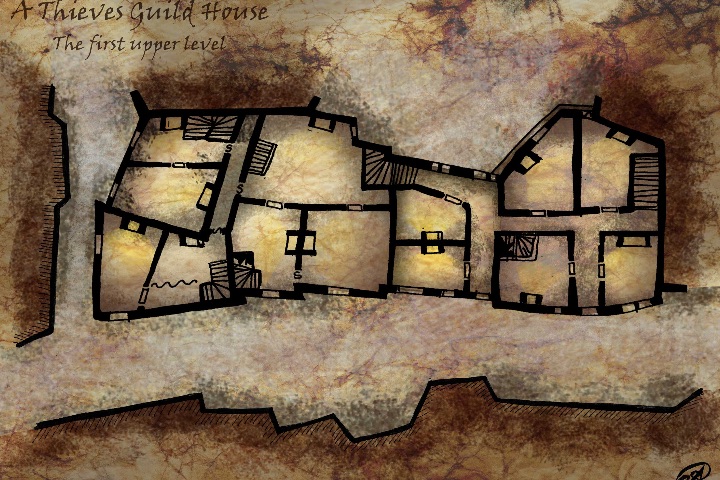 Maps from Below ground to rooftop level, this den of thieves is not to be taken lightly!
Thieves Guild House 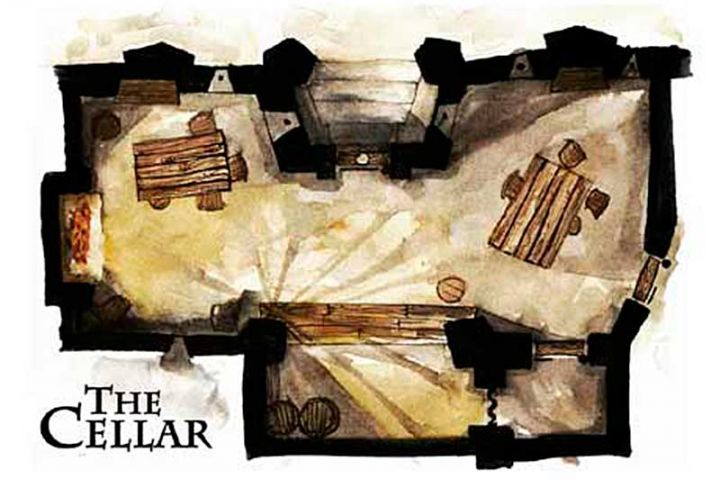 A popular hang out for the guardsmen and soldiery of the area​.
The Cellar Tavern